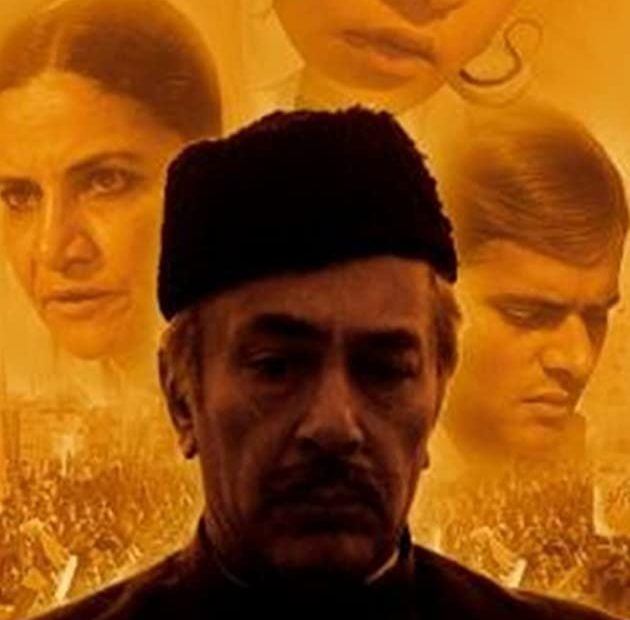 The Mirzas are a Muslim family living in a large ancestral house and running a shoe manufacturing business in the city of Agra in the United Provinces of northern India (now the state of Uttar Pradesh). The story begins in the immediate aftermath of India’s independence and the partition of India in 1947. The family is headed by two brothers; Salim (Balraj Sahni), who heads the family business, and his elder brother Halim, who is mainly engaged in politics and is a major leader in the provincial branch of the All India Muslim League, which led the demand for the creation of a separate Muslim state of Pakistan. Salim has two sons, the elder Baqar, who helps him in the business, and Sikander (Farooq Shaikh), who is a young student. Halim’s son Kazim is engaged to Salim’s daughter, Amina. Although he had publicly promised to stay in India for the sake of its Muslims, Halim later decides to quietly emigrate to Pakistan with his wife and son, believing that there was no future for Muslims in India. Salim resists the notion of moving, believing that peace and harmony would return soon, besides which, he has to care for their ageing mother, who refuses to leave the house of her forefathers. This puts Kazim and Amina’s marriage plans on hold, although Kazim promises to return soon to marry her. Halim’s stealthy migration affects Salim’s standing in the community. In the aftermath of partition, the sudden migration of many Muslims from Agra left banks and other lenders deeply reluctant to lend money to Muslim businessmen like Salim Mirza, who had previously been held in high esteem, over fears that they would leave the country without repaying the loan. Unable to raise capital to finance production, Salim Mirza’s business suffers. Salim Mirza’s brother-in-law, formerly a League supporter, now joins the ruling Indian National Congress in an attempt to get ahead in independent India while his son Shamshad unsuccessfully woos Amina, who is still devoted to Kazim and hopeful of his return. Halim’s migration to Pakistan makes the family home an “evacuee property” as the house is in Halim’s name and Halim did not transfer it to Salim Mirza. The Indian government mandates the take over of the house, forcing Salim Mirza’s family to move out of their ancestral home, which is very hard on Mirza’s aged mother. Salim’s wife blames him for not raising this issue with his brother Halim before he left for Pakistan. Mirza resists his wife’s hints that they also move to Pakistan and his elder son’s calls for modernizing the family business. Mirza finds it difficult to rent a house, facing discrimination owing to his religion and fears that a Muslim family would skip out on rent if they decided to leave for Pakistan. He finally succeeds in finding a smaller house to rent, but his business is failing and despite his son’s exhorting, refuses to change with the times, believing that Allah would protect them. Salim Mirza’s passiveness and disconnection from the outside world leaves his wife and son frustrated. The Mirza family house is bought by a close business associate, Ajmani, (A.K. Hangal) who respects Mirza and tries to help him. Despite growing troubles, the family is briefly buoyed by Sikander’s graduation from college. Amidst these problems, Salim Mirza is investigated by the police on charges of espionage over his sending plans of their former property to his brother in Karachi, Pakistan. Although acquitted by the court, Mirza is shunned in public and faces a humiliating whisper campaign. Mirza’s long aversion to leaving India finally breaks down and he decides in anger to leave for Pakistan. Sikander opposes the idea, arguing that they should not run away from India, but fight against the odds for the betterment of the whole nation, but Salim decides to leave anyway. However, as the family is travelling towards the railway station, they encounter a large crowd of protestors marching against unemployment and discrimination, which Sikander had planned to join. Sikander’s friends call out to him, and Salim encourages him to join the protestors. Instructing the carriage driver to take his wife back to their house, and the film ends as Salim Mirza himself joins the protest, ending his isolation from the new reality.

Director:M. S. Sathayu Producer:Abhisivani Isan Arya Music:Aziz Ahmed Khan, Ustad Bahadur Khan Main Cast:Balraj Sahni, Farooq Shaikh, Vikas Anand, Gita Siddharth… more Genre:Social Like * Comment * Share – Don’t forget to LIKE the video and write your COMMENT’s Statutory Declaration: Contents of this Film,Scene,Song which was released, as per available sources now are in the public domain since the term of copyright has expired,under the copyright act 1957.