“Peace cannot be kept by force but only through understanding” 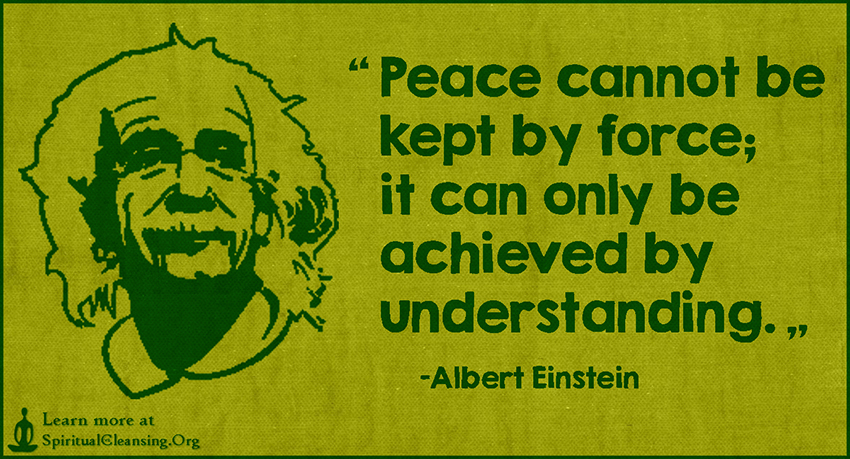 “Death is nothing, but to live defeated and inglorious is to die.”- Napoleon Bonaparte. For ages such idealistic notions of war has been romanticized. Rulers and military leaders thought that they could best enhance their prestige and prosecute their own careers by the aggressive expansion of state territory. The path of peace is often misunderstood to be victory or the oppression of the parties involved. The reality, however, remains that peace can only be achieved by mutual understanding and not by an absence of war through force or military threat. Peace is relatively a term that characterizes civilizations that have existed since our early days in evolution. History has been the witness for the cause of peace that was violated time and again across the globe. After witnessing immense destructions in two world wars the world was committed to establish peace & a new world order where each country will get its legitimate due. it is a fact that every man has an innate quality to dominate others which is  clearly evident  through what we have faced post world war II – cold war, arms race, space race between US & USSR (modern-day Russia). US intervened militarily in many countries like Iraq invasion, just to establish its supremacy. As world history has indicated, the offensive relations amongst parties involved does not do any good to either of the parties and mutual understanding is the true key to having a constructive development towards building a safer world. The key to maintaining peace is mutual understanding rather than forcefully depriving the harmony of the societal pattern of any regional entity. Peace can be considered as a continual process. Indian history is replete with such situations & an attitude of ‘statesmanship’ on part of our rulers & leaders. For instance Emperor Ashoka understood that peace can only be established by developing tolerance & understanding of other faiths after the witnessing the devastation in Kalinga war & completely denounced war and force to establish peace and victory. Even independent India had drawn a lot of its ideas from the National movement & Gandhian legacy which not only worked for peaceful resolution of conflicts such as linguistic re-ogranisation of states, greater autonomy to tribal areas, religious freedom to all, safeguards to minorities & disadvantaged groups etc within the country  but also to preached for international peace and security. In fact our first prime minister, Jawaharlal Nehru, worked within UN framework to check any act of military aggression to establish eternal peace. “My non-violence does not admit of running away from danger and leaving dear ones unprotected.”- GANDHI. Gandhi believed non-violence is the first approach to combating an aggressor. Peace over violence is the first approach. Taking a nonviolent stand takes more effort, time and planning than many people truly realize. Violence encompasses many human traits such as, greed, lust, power, and selfishness. Peace however encompasses selflessness, love, and respect. It is much harder and takes much more human will power to use peaceful means rather than violence.

Political scientist Erica Chenoweth used to believe that violence is the most reliable way to get rid of a dictator. After all history is filled with coups, rebellions and civil wars. She was however surprised by the data she collected on all major nonviolent and violent campaigns for the overthrow of a government or a territorial liberation since 1900. Chenoweth says that nonviolent campaigns are becoming increasingly successful. The data collected actually shows a big rise in violent successes in the 1970s and ’80s, perhaps a product of both decolonization — the departure of European powers from sub-Saharan Africa which was followed by a number of violent conflicts over power — and the Cold War, in which U.S. and Soviet backing might have helped push rebel movements toward success. But that trend has been reversed significantly since the end of the Cold War, with nonviolent successes way up. She enumerates some of the reasons behind it. She says that firstly, the opponent is less likely to engage in violent acts upon unarmed citizens because it is probable that it will fail in their defence. If innocent unarmed civilians are hurt then it is likely that more citizens will rise up against the opponent. Secondly another reason that non-violence is more successful is the very important method of coming to an understanding. It hopes to find a common ground to work together to get what both parties desire. It is important to remember that the end result to violence is bitterness but the end result to non-violence is harmony. Thirdly, nonviolent campaigns typically attract more participants, including women, elderly folks, and others who do not want to take on the risks or the moral burdens of running around with guns and explosives, but are willing to pass on information about government atrocities, and to engage in boycotts, strikes, or nonviolent protests.

The general decline in moral values, a general lack of ‘statesmanship’ on part of leaders has endangered the ‘world peace’ in various ways. The world leaders have to understand that such narrow attitude to serve one’s home constituencies is disastrous for the whole of humanity in the long run. They need to understand that they owe a peaceful, prosperous, environmentally stable, safe, & secure planet for their future generations. The leaders need to develop ‘statesmanship behaviour’ to view every issue from larger perspective of global welfare not from a narrow prism and an attitude of tolerance, compassion & inculcation of emotional intelligence to understand other’s viewpoint. Violence does not persuade, it only forces. If humans would learn to not relive history, then we could finally move forwards as a species.